A Day of Flooding.

We were awoken by a huge crash of thunder sounding over head.  Then the rain started and continued heavily all morning.  By mid-day the lane was flooding and all traffic ceased.  A huge difficulty for a rural, farming community.

We were just settling down to watch the Wimbledon semi-final when our kind neighbour came to see if we were ok.  By then, the flood was coming in the drive, filling the forecourt and starting to flood down the steps in a waterfall.  It happened so quickly with power of the water frighteningly awesome.

Fortunately, it started to recede as quickly leaving behind mud and debris.  Just as we thought it was over, the rain started heavily again and the flood built up again but not so severely.  At 6.30pm traffic is on the move again.

The birds never stopped feeding.  What a hard summer it has been for them. 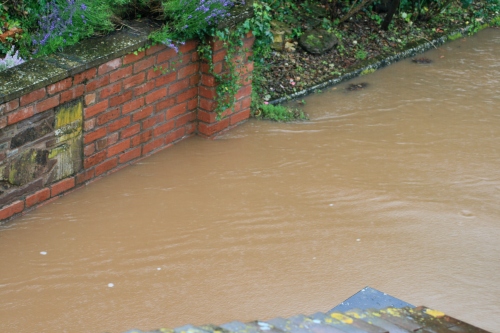