Please ask your MP if they were there at this important debate and if not why not. These are very serious questions that need at the least very different answers so we need to keep requesting a different response than this. At least a definite time scale or that esa is paid during the wait for the tribunal.
Well done Sheila Gilmore for her perseverance. The truth is still the truth even if MP’s cannot be bothered to attend. 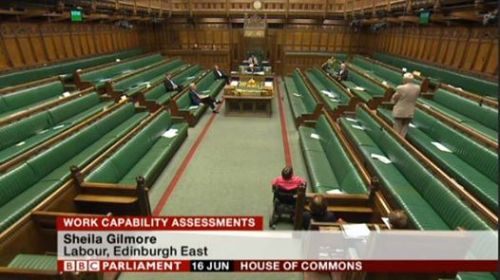 National disgrace: The green benches were almost empty during yesterday’s debate on the DWP’s new ‘mandatory reconsideration’ regime – and the potential number of deaths it is causing.

It is hard to know where to start. Perhaps with DWP minister Mike Penning’s failure to answer the questions raised in yesterday’s adjournment debate on the ESA ‘mandatory reconsideration’ process, despite having prior notice of Sheila Gilmore’s entire presentation? Perhaps with the DWP’s failure to release accurate statistics, which is especially appalling as press officer Richard Caseby attacked a newspaper for inaccuracies very recently? Perhaps with the DWP’s continuing denial of the deaths caused by its increasingly-bizarre and unreasonable attempts to save money?

(Apparently they’re “anecdotal” so they don’t count. Does everybody recall when Iain Duncan Smith used similarly anecdotal evidence to support his claim that his benefit cap was “supporting” people into work, last year?)

The debate was brought to…