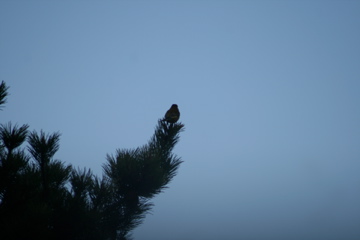 Early this morning, at just before 6.0am, a dunnock softly ushered in the dawn chorus.  It’s sweet song was repeated to wake everyone and announce that a new day had begun and they were still about guarding their territory.  Then the robin joined in and the blackbird in with it’s full-throated song, trills and whistles.

As the light strengthened and brightened, the chorus stopped as the birds went off to feed.  Then they started up again and last to join were the resident ring-collar doves cooing away in the lower registers.

Another day of feeding, mating, strutting and displaying as the temperature rises and the daylight increases.